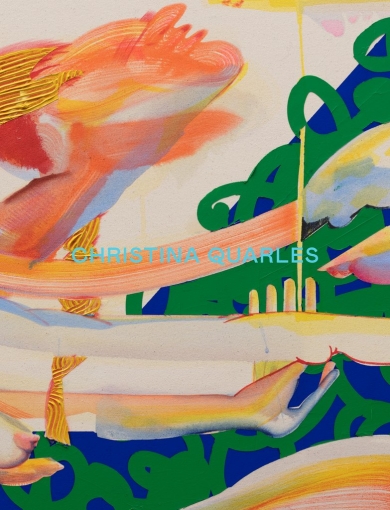 Christina Quarles is the artist's first monograph published to accompany her exhibition Christina Quarles at The Hepworth Wakefield (19 October 2019-19 January 2020). The exhibition brings together new and recent works in the artist’s first museum exhibition in Europe. In her large-scale paintings, Christina Quarles (b. 1985, USA) depicts bodies rendered in a patchwork of painterly techniques, which intermingle and collide with domestic objects, architectural planes and the limits of the canvas frame itself. Quarles’s paintings combine observations from life with an attempt to express the physical experience of inhabiting her own body, describing them as ‘portraits of inhabiting a body, rather than portraits of looking onto a body.’

Quarles’s paintings create spaces in which to explore the complex intersections of race, sexuality and gender that lie at the heart of each of our identities. Quarles herself identifies as a queer cisgendered woman. Born to a black father and white mother but with fair skin that doesn’t visibly evidence her black heritage, the artist is interested exploring the disjuncture between what we know of ourselves and how we are perceived by others. Like colour itself, which is relative and not absolute, Quarles approaches representations of race, as well as sexuality and gender, as facets of identity that are constantly being redefined in relation to shifting contexts.

This monograph comprises a new essay by Andrew Bonacina, Chief Curator at The Hepworth Wakefield and an in-depth conversation between Christina Quarles and art historian David J. Getsy.