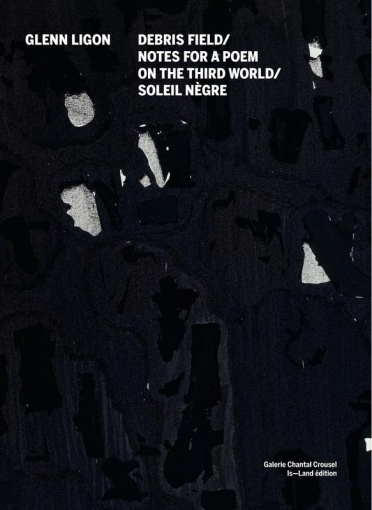 Glenn Ligon: Debris Field/Notes for a Poem on the Third World/Soleil Nègre

Since the 1990s, Glenn Ligon has been exploring the history of the United States' literature and social issues focusing on words, their meanings and their illegibility. By referencing various literary sources such as the writings of James Baldwin, Gertrude Stein, Walt Whitman or Jean Genet to name a few, his approach gives the word an almost palpable weight and density.

In this new series of works presented in Paris, Glenn Ligon leads the text towards an even more abstract dimension. While the quote from Gertrude Stein's 'Three Lives' disappears under a layer of coal dust in the 'Negro Sunshine' series, the language disintegrates to take the form of abstract letters in the 'Debris Field' paintings and the universally symbolic image. Hand replaces the text to give shape to the two neons. Text by Sara Nadal-Melsió and poems by Gregg Bordowitz.