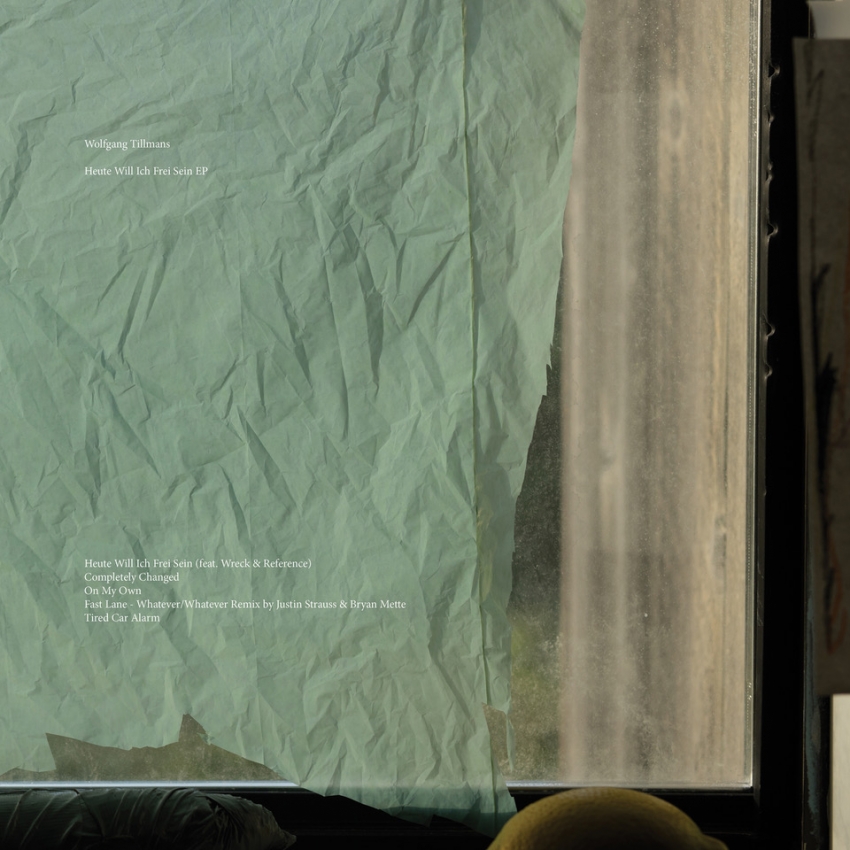 Heute Will Ich Frei Sein sets the energetic tone for the 5-track EP that leads straight onto the dancefloor, a space that Tillmans has observed and discussed from various angles throughout his artistic career. The track was recorded in Los Angeles with experimental noise duo Wreck and Reference whose beats and 808 staccato claps instantly create a hedonistic dance moment that Tillmans’ lyrics contrast in the simplicity of their message:

“Today I want to be free. Feel my body. Without fear and implosion. Acceptance.” Originally written without clubbing in mind, Wreck & Reference’s version transforms these lines in a call for preserving independent free clubs and non-commercial spaces as safe places for self-expression.

Completely Changed and On My Own, Tillmans and his long-term collaborators Tim Knapp, Jay Pluck, and Kyle Combs return to more song based recordings but with a stronger approach on synthesiser soundscapes. On My Own finds Tillmans’ mantric lyrics sung on a staggering pop production which is based on the artist’s recordings of screeching trains in New York City’s Subway. Completely Changed feels like an ever-building intro without ever being resolved. This ambiguity marks Tillmans’ writing and constant strive for variation.

The EP features a remix of Fast Lane, a song originally written and recorded in 1986 with Bert Lessmann. The remix by New York club legend Justin Strauss and Bryan Mette replace the original’s nervous arpegiators with a seductive ever driving forward slow synth line. Crafting bold genre-crossing dance tracks is a signature of Mette & Strauss’ work. “I live in the fast lane but I have no fear” sings Tillmans’ 18 year-old self, knowing that fear itself might never be fully overcome but can be a force that sparks our audacity to do something, stand up and move ourselves.

Tired Car Alarm is a Tillmans field recording of a car alarm whose batteries are close to exhaustion. It can be enjoyed purely as a ready-made or can be used as a DJ tool.

Whatever/Whatever is the production duo of Justin Strauss and Bryan Mette. Recent releases include remixes for Goldfrapp, Sparks, Franz Ferdinand and an original track on the “Sisters and Brothers - The Gathering” compilation.

Wreck & Reference are an experimental noise project from California, formed in 2011 by Felix Skinner and Ignat Frege. Drawing upon the blown-out intensity of black metal and noise rock, they eschew traditional guitar-centric instrumentation to construct songs with digital samples, drums, and voice. To date, the band has released three full-length albums and two EPs. Their first work, an EP titled Black Cassette, showcased distorted fragments and synthesizers in angular, heavy songs, with themes of determinism and Cormac McCarthy-esque isolation. Their debut full length Y̶o̶u̶t̶h̶ (2012) and their sophomore release Want (2014), described by Pitchfork as having “radical vision” and “boundless experimentation,” represented dramatic expansions of their sonic palette. In 2016 Wreck and Reference released their third LP, Indifferent Rivers Romance End. Considered by many to be their definitive album, Indifferent Rivers saw Wreck and Reference perfect their song craft and push their noisy, sample-based instrumentation to its limits.